KUALA LUMPUR, April 4 — After Rayani Air, a new Malaysian airline boasting Shariah-compliance is hoping to take to the skies this November promising a premier service that caters to the religious needs of its Muslim passengers.
While Rayani Air currently services domestic routes, Waqf Airlines is more specialised. The CEO of Waqf Airlines’ operator Air-Riths Sdn Bhd Datuk Rithsman Mohamed said the airline seeks to fly Muslim pilgrims heading to Islam’s holiest city, Mecca, as well as the Saudi Arabian city of Jeddah, at subsidised, and therefore, cheaper prices.
“Even though we are offering low pricing, Waqf Airlines is not a low-cost carrier. It is very vital to portray the image of Waqf as premier and very honourable and valuable in Islam.
“We are comparable with other premier airlines and, what more, we are flying people to perform one of the very important religious tasks,” the airline told Malay Mail Online in a recent email interview.
Rithsman also said Waqf Airlines aims to be the first local airline to be certified by religious authorities as Shariah-compliant.
“As you know like halal, they have one department to certify halal, same goes to Shariah compliant. Actually that is what we go through; we are being monitored by the Islamic council to get Shariah compliant (status). Shariah compliant (status), actually you cannot just simply use, because they have the guidelines,” he toldMalay Mail Online.
Shariah-compliant to the very end
For Waqf Airlines, Shariah compliance covers all aspects of its operations, from aboard the plane to its funding.
Its crew will don uniforms that meet both Islamic modesty standards and international safety standards, and its inflight food will, of course, be halal.
The airline said it will also provide knowledge about Islam and the Haj to its Muslim pilgrim passengers as part of its inflight infotainment.
An ustaz, or Islamic cleric, will be on board and provide a short tazkirah, or religious talk, during both the outbound and return flight.
Before takeoff, the flight captain will also lead passengers in a recitation of prayers for a safe journey; prayer times will also be announced on board and the plane may even provide a small space for passengers to perform their prayers — subject to safety requirements.
The airline conceded that “total segregation between men and women may not entirely possible on board of aircraft”, but it said it will prioritise seating family members together.
Beyond ensuring compliance in its flight operations, the airline said it will have a Shariah panel to advise and oversee its compliance with Islamic laws, including ensuring its funding sources are halal, which it said will be fulfilled through legitimate loans and waqf contributions.
The airline operator Air Riths is a 100 per cent Bumiputera and Muslim-owned incorporated company formed as a joint collaboration between the project brainchild’s Perbadanan Wakaf Selangor together with Eco Riths Travel and Tour Sdn Bhd.
Air Riths, which will be operating Waqf Airlines as a charter-type licence airline, has been given the power of attorney to collect waqf funds or charitable donations from the Selangor Islamic council’s subsidiary Perbadanan Wakaf Selangor to subsidise its operations.
Waqf Airlines said it has a strategy that not only offers cheaper fares to Muslim pilgrims, but plans to give away part of its proceeds to charity at the same time, and eventually, turn into a non-profit company while doing so.


In a comparison schedule based on early 2015 data made available to Malay Mail Online, Waqf Airlines initially planned to offer a fixed RM3,000 for a round-trip ticket, as compared to its local competitors’ prices of at least RM3,100 that can go up to RM3,400 or more depending on seasonal demand.
While the initial price difference may not seem big, Waqf Airlines said it will continue to lower prices over time, as the public contributes more waqf funds to subsidise its operations.
With the Selangor Fatwa Council already having issued an edict approving the use of the waqf funds, Waqf Airlines’ projections show ticket prices going down to an expected RM2,700 in 2017, RM2,500 in 2018 and below RM2,000 from 2019 onwards.
For a start, Waqf Airlines plans to offer a round-trip ticket from Kuala Lumpur to Jeddah at RM2,900 inclusive of airport tax throughout the season for umrah, or Muslim pilgrimages, except during the Ramadan period.
Built into the price is a charitable waqf contribution of RM50 that goes back to Perbadanan Wakaf Selangor’s account, RM10 contribution to NGOs for humanitarian activities.
The airline also wants to channel 20 per cent of its net profit to Perbadanan Wakaf Selangor’s waqf fund for welfare projects and 2 per cent of its annual aggregate income to humanitarian and corporate social responsibility projects.
On top of that, Waqf Airlines plans to allocate 500 free return tickets aboard each of its aircraft per Muslim pilgrimage season to those in the lower-income group, with Perbadanan Wakaf Selangor to select and distribute to eligible recipients.
The airline plans to use Airbus A330-300-type aircrafts with seat configurations of between 300 to 350 passengers per dual class flight, which would mean an estimated 60,000 passenger load per aircraft for each umrah season.
The early stages of Waqf Airlines’ operations will also see it using a profit-based model to cover expenses and loan repayments as well as to provide for expansion, with the company to be non-profit when the waqf funds grow.
“In order to keep umrah and haj costs lower and make it more affordable, especially to the lower income group, Wakaf plan to embark on ground services (hotel and transport) in Saudi Arabia.
“By providing complete services for umrah and haj on waqf concept, only then able to lowering umrah and haj costs,” it said.
Asean and beyond
From Kuala Lumpur, Waqf Airlines said it hopes to expand its operations to fly from other South-east Asian cities and China, in line with its ambition to be the largest airline operator to serve the global Muslim population, as well as its vision to be the most competitive Shariah-compliant charter airline that is reliable and has zero delays on its flights dedicated for Muslim pilgrimages.
It has set an initial target of 35 per cent of passengers from Malaysia, 60 per cent from Indonesia and the remaining five per cent from Singapore and Brunei.
Malaysia’s haj quota for this year’s pilgrimage season remains at 22,320 pilgrims, while the quota allocated to Indonesia and Brunei remains at 168,800 and 400, respectively.
Waqf Airlines said it may seek approval in its fifth year of operations to fly directly from Indonesia — home to the world’s largest Muslim population — to Jeddah and Madinah.
“Eventually, we foresee to fly direct from other countries to Jeddah. We hope that the Airline will benefit the Muslim Community as whole and Malaysia as a country.
“This is in line with our tagline, ‘From Ummah To Ummah’,” the airline said in its email reply.

The immediate future
Waqf Airlines had through Air Riths obtained on January 14 approval for an Air Service Permit (ASP) for chartered flights from the Department of Civil Aviation (DCA), and is now working towards getting an Air Operator Certificate (AOC) before it can start flying.
The airline explained that the AOC approval must be obtained within a year of the ASP’s approval, with the requirements to be fulfilled, including aircraft leasing and inspection, employment of cabin crew, engagement or establishment of aircraft maintenance firm.
Waqf Airlines said it can only start selling tickets after the DCA issues the AOC, adding that it will also have to submit an application for its AOC to the Saudi Arabian authority.
Source : www.themalaymailonline.com 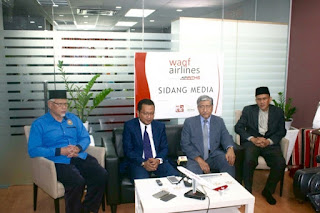